The Jewish Museum of Maryland is hosting a fantastic exhibit that highlights Pope John Paul II’s many efforts to foster better understanding between Catholics and Jews.  Check out this video report. 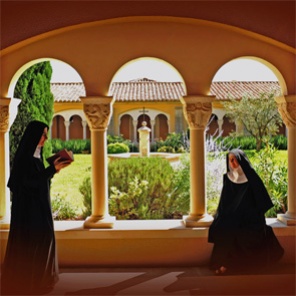 An order of French nuns has climbed the U.S. and U.K. classical charts with a new album, “Voices: Chant from Avignon.”

Bloomberg has the story here.  A snip:

The Benedictine Nuns of Notre-Dame topped U.S. and U.K. classical charts with their album “Voices: Chant From Avignon” on Universal Music Group’s Decca Records after a search for female Gregorian chanters. Forbidden from leaving the convent, the women shot the album cover and TV commercial and signed the record deal by passing papers under a grill that divides them from the outside world.

The nuns now share a record company with artists such as Lady Gaga, who was educated at New York’s Convent of the Sacred Heart, Elton John, Eminem and Amy Winehouse. The sisters are part of a wave of singing fishermen, soldiers and painters that record companies are courting to appeal to an older, often- ignored audience that’s accustomed to paying for music and not downloading it illegally.

“This is part of the reality of selling music in the 21st century,” said Mark Mulligan, a music industry analyst at Forrester Research. “You go after every little niche you can get. There’s also a genuine recognition that labels can’t afford not to pay attention to this segment anymore.”

Record companies are cashing in on such acts with a flurry of releases this Christmas season, including the nuns and music from The Chelsea Pensioners and The Great British Barbershop Boys. About 25 percent of all albums are sold in December, according to the British Recorded Music Industry trade organization.