It’s an understatement to say that the people of Poland – and especially the people of Blessed Pope John Paul II’s hometown of Wadowice – love their Polish pope.  Check out this video report on how the late pope’s home parish expresses that love. 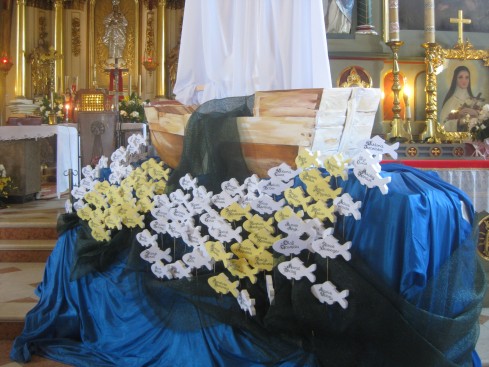 Names of first communicants are shown on fish figures inside the Basilica of the Presentation of the Blessed Virgin Mary in Wadowice, Poland. (CR/George P. Matysek Jr.)

Inside the Basilica of the Presentation of the Blessed Virgin Mary – the same church where the future pope received his own First Holy Communion – dozens of fish-shaped figures stand near the sanctuary. Each yellow or white marker bears the name of a child who is receiving the Blessed Sacrament for the first time. Ornate calligraphy spells out names such as “Michal,” “Filip,” “Norbert,” Natalia” and “Marcelina.”

All the fish “swim” alongside a boat whose sail is stamped with a red symbol for Christ. The boat’s course is set firmly on the altar, the place where bread and wine become the Body and Blood of Christ.

The display is rich in meaning, with the fish serving as an early symbol of Christianity, and the boat – the “Bark of St. Peter” – representing the Church that can sometimes be tossed on a sea of disbelief, yet remains fixed on Christ.

It’s a pretty cool idea – and one that I suspect a lot of American parishes might like to imitate.

Ascending the mountains with Jan Pawel

The Tatra Mountains are seen through the fog May 28 in Poland. (CR/George P. Matysek Jr.)

ZAKOPANE, Poland – Even on a dreary, rain-filled day, few vistas are as spectacular as the Tatra Mountains in Southern Poland.

A 26-member Baltimore pilgrimage group, led by Bishop Mitchell T. Rozanski, made it to one of the mountain peaks via a cable car May 28 – catching glimpses of the snow-dotted terrain through raindrops and fog. It was the same route Blessed Pope John Paul II had taken during his 1997 visit to his homeland. In his youth, the Polish pope often hiked and skied in the Tatras. 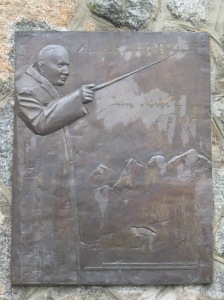 The resort station, which attracts visitors from throughout Europe and around the world, has numerous tributes to the late pope. A large plaque commemorates his 1997 visit, portraying the pope pointing his cane skyward to his beloved mountains.

When the pope was asked to write in the guest book during his visit, he wrote, “Benedicite montes dominum” – “You mountains, bless the Lord.”

In the footsteps of Blessed John Paul II 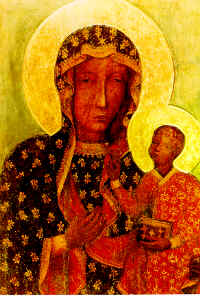 Our Lady of Częstochowa

Tomorrow morning, Bishop Mitchell T. Rozanski will lead a pilgrimage to the Czech Republic, Hungary and Poland.  I’ll be reporting on the spiritual journey for The Catholic Review — both on this blog and in the print edition of the newspaper.

Over the next two weeks, be sure to check The Narthex for updates, photos and video reports from Europe. I hope to provide a glimpse into the deep spirituality and strong Marian devotion in that part of the world. I also hope to gain some insights into the holy sites that shaped Blessed John Paul II, while experiencing Catholicism as it is practiced more than two decades after the collapse of Communism.  They’ll be some surprises along the way, I’m sure.

Stay tuned.  Much more to come.

Our Lady of Częstochowa…Oroduj za nás — Pray for us.

Thumbs down on new pope statue

A newly installed, hulking statue of Blessed Pope John Paul II is getting big-time thumbs down in Italy.  What do you think?  Is it really that ugly?  I haven’t seen it in person, but the AP photos seem to confirm the criticisms.

A new, modernist sculpture of Pope John Paul II is turning into a monumental bust. The Vatican on Friday slammed the giant artwork outside Rome’s Termini Train Station, saying it doesn’t even resemble the late pontiff.

“How could they have given such a kind pope the head of a Fascist?” said 71-year-old Antonio Lamonica.

As he pondered the statue in the bustling square, his wife muttered: “It’s ugly. Really ugly. Very ugly.”

The artist, Oliviero Rainaldi, depicted the pontiff as if he is opening his cloak to embrace the faithful. But the Vatican newspaper L’Osservatore Romano said the effect of the nearly 5-meter (16-foot) statue bears “only a distant resemblance to the pope.”

Artistic intent aside, “we find ourselves in the piazza before a violent gash, like a bomb, that ends up assimilating a cloak that almost looks like a sentry box, topped by a head of a pope which comes off too roundish,” critic Sandro Barbagallo wrote in Friday’s L’Osservatore.

“Altogether, the result doesn’t seem to reach the intent,” the newspaper said, noting that it wasn’t alone in its criticism.

Check out the rest here.

Retired Secret Service Agent James Le Gette displays a photo of him with Pope John Paul II while he was assigned to protect the pope during his 1979 visit to the United States. (Owen Sweeney III/Catholic Review File)

The recent announcement that Pope John Paul II will be beatified May 1 brought renewed attention to the late Polish pontiff’s intense prayer life and his almost mystic spirituality.

But the pope also had a playful side.

James Le Gette, a Secret Service agent assigned to help protect the pope during the Holy Father’s first visit to the United States in 1979, caught a glimpse of that playfulness firsthand. The parishioner of St. John in Severna Park was with the pope at St. Matthew’s Cathedral in downtown Washington, Oct. 7.

Joseph Kirk Ryan, former managing editor of The Catholic Review, recounted the story in this snip from a 2005 CR article:

Mr. Le Gette had positioned himself on the landing of a stairway leading down from the floor where the meal for the pope was held.

When he saw the papal party approaching the stairs, Mr. Le Gette looked down the stairs and got on his radio to say, “We’re coming for sure.”

“I turned back to see where he (the pope) was, because I was concerned about a tumble,” Mr. Le Gette said.

That was when the agent saw the pope “hind-saddle coming down the banister.”

“I turned around, grabbed him and he grabbed me.”

Mr. Le Gette looked at the rest of the papal party coming down the steps the old-fashioned way.

“Everybody is standing there: ‘What is he doing?” he recalled. “It was totally impromptu.”

It’s been eagerly anticipated for years.  Now it’s a reality. Pope John Paul II will be beatified May 1.  Here’s a small snip from the official decree issued today in Rome: 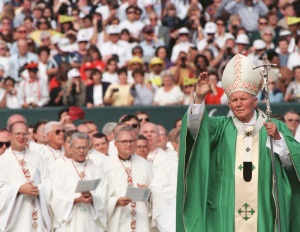 Pope John Paul II waves to an estimated 60,000 people in Oriole Park at Camden Yards in Baltimore Oct. 8, 1995. The liturgy was held during the pope's 1995 pastoral visit to America. (CNS file photo by Nancy Wiechec)

John Paul II’s pontificate was an eloquent and clear sign, not only for Catholics, but also for world public opinion, for people of all colour and creed. The world’s reaction to his lifestyle, to the development of his apostolic mission, to the way he bore his suffering, to the decision to continue his Petrine mission to the end as willed by divine Providence, and finally, the reaction to his death, the popularity of the acclamation “Saint right now!” which someone made on the day of his funerals, all this has its solid foundation in the experience of having met with the person who was the Pope. The faithful have felt, have experienced that he is “God’s man”, who really sees the concrete steps and the mechanisms of contemporary world “in God”, in God’s perspective, with the eyes of a mystic who looks up to God only. He was clearly a man of prayer: so much so that it is from the dynamism of his personal union with God, from the permanent listening to what God wants to say in a concrete situation, that the whole of “Pope John Paul II’s activity” flowed.

Click here for a full report on the beatification from Catholic News Service.

The Jewish Museum of Maryland is hosting a fantastic exhibit that highlights Pope John Paul II’s many efforts to foster better understanding between Catholics and Jews.  Check out this video report.